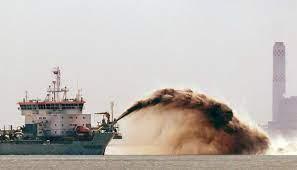 Tanjungpinang, Batamnews - The sea sand mine in Riau Islands has the potential to generate income of up to Rp 7 trillion per year. This was revealed by the Chairman of Riau Island's Local Parliament (DPRD), Jumaga Nadeak.

This sector is considered very promising to boost the regional economy. He said Riau Islands was a maritime area with 96 percent of the sea area and only 4 percent of the land.

"For this reason, the Riau Islands DPRD will encourage mining taps and sea sand exports to be opened immediately," said Jumaga in Tanjungpinang, Monday (12/4/2021).

He said that sea sand mining is a natural resource (SDA) that can be managed and utilized for the prosperity of the people of Riau Islands.

"However, it is true that a legal law and clear rules must be prepared so that it does not cause legal problems and of course the environment. When Riau Islands province is already rich after three years of operation of the sea sand mine. It will be closed. The operation doesn't have to last long. "explained Jumaga.

According to him, miners are required to have an official mining business permit (IUP) from the government. Then, mining licensing regulations must be one door so that illegal mining practices do not occur.

Besides, mining activities are asked not only to be oriented to economic aspects alone. However, it is mandatory to pay attention to the preservation of nature and the surrounding environment. "Yes, that was earlier, if everything is according to the rules, we will support the sea sand mining taps," said Jumaga.

Jumaga explained that the Kepri DPRD had also passed a Regional Regulation (Perda) on the Zoning Plan for Coastal Areas and Small Islands (RZWP3K) in mid-December 2020.

"One of the local regulations is to accommodate plans for sea sand mining in the Riau Islands region," he said.